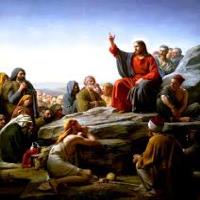 But We See Jesus

Hebrews 1:10 - 2:10 (KJV)
And, Thou, Lord, in the beginning hast laid the foundation of the earth; and the heavens are the works of thine hands: 11 They shall perish; but thou remainest; and they all shall wax old as doth a garment; 12 And as a vesture shalt thou fold them up, and they shall be changed: but thou art the same, and thy years shall not fail.
13 But to which of the angels said he at any time, Sit on my right hand, until I make thine enemies thy footstool? 14 Are they not all ministering spirits, sent forth to minister for them who shall be heirs of salvation?
​1 Therefore we ought to give the more earnest heed to the things which we have heard, lest at any time we should let them slip. 2 For if the word spoken by angels was stedfast, and every transgression and disobedience received a just recompence of reward; 3 How shall we escape, if we neglect so great salvation; which at the first began to be spoken by the Lord, and was confirmed unto us by them that heard him; 4 God also bearing them witness, both with signs and wonders, and with divers miracles, and gifts of the Holy Ghost, according to his own will?
5 For unto the angels hath he not put in subjection the world to come, whereof we speak. 6 But one in a certain place testified, saying, What is man, that thou art mindful of him? or the son of man, that thou visitest him? 7 Thou madest him a little lower than the angels; thou crownedst him with glory and honour, and didst set him over the works of thy hands: 8 Thou hast put all things in subjection under his feet. For in that he put all in subjection under him, he left nothing that is not put under him. But now we see not yet all things put under him. 9 But we see Jesus, who was made a little lower than the angels for the suffering of death, crowned with glory and honour; that he by the grace of God should taste death for every man.
10 For it became him, for whom are all things, and by whom are all things, in bringing many sons unto glory, to make the captain of their salvation perfect through sufferings.

This site uses Akismet to reduce spam. Learn how your comment data is processed.

Bible Study
Come join us at 9:45 am Sunday mornings. We\'d love to see you there!

Photos Needed
If you have pictures, video, or audio from any past church events, we\'d love to add them to our site. Please see Bro. Keith

Prayer Request List
We have replaced the old Pray Request application with a different one. This new version also allows the user to enter a Praise Report and comments can be added to update the prayer or praise report.